Superconductivity sounds like a superpower, but it’s not—at least not in the traditional sense. It refers to the property of zero electrical resistance in some metals at very low absolute temperatures, allowing high amounts of electric current to pass through the material. Metal that has become superconductive also emits a magnetic field, meaning it can be a very powerful magnet when coiled.

So how have superconductors as a technology evolved over the years, and what is expected out of them in the future? Here, we continue the dialogue between Yukihiro Sumiyoshi and Shohei Takami, the former a long-time engineer that has been working with superconductivity technology since the 1980s, and the latter an engineer supporting the “now” of superconductivity in Japan. What exactly happens at the front lines of such a new technology? 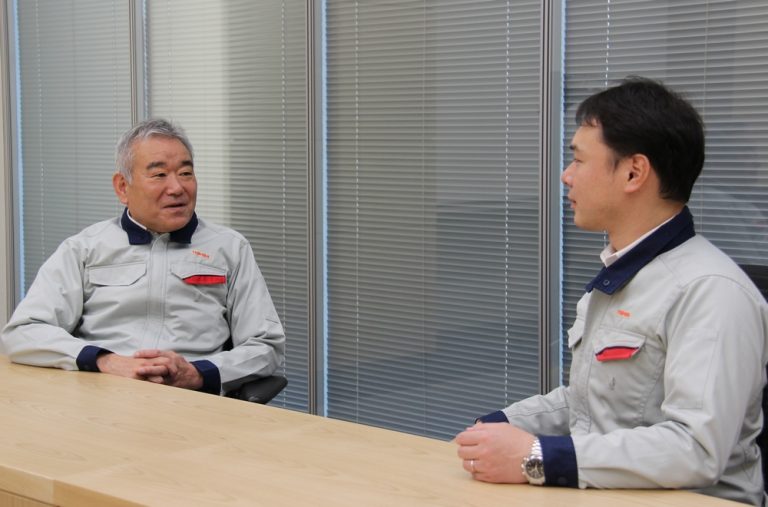 ――In article “Zero Electrical Resistance: Turning Dreams into Reality“, we asked Sumiyoshi and Takami about Toshiba’s heavy ion therapy equipment, which help make cancer treatment a more comfortable experience for patients. This time we want to delve a bit deeper into that technology.

Takami: The technology very much came from the superconducting magnets Toshiba developed for the silicon single crystal pull-up apparatus, which I was involved with in 2007, my second year at the company. So before I get to the heavy ion therapy equipment, I’ll have to take you through the development process for the pull-up apparatus.

――When making semiconductors, you have to fuse silicon at a temperature of over 1,000℃. Then, you have to pull up the now crystalline silicon, rotating it along the way, which is where the semiconducting magnet comes in. Its properties help pull up the silicon. 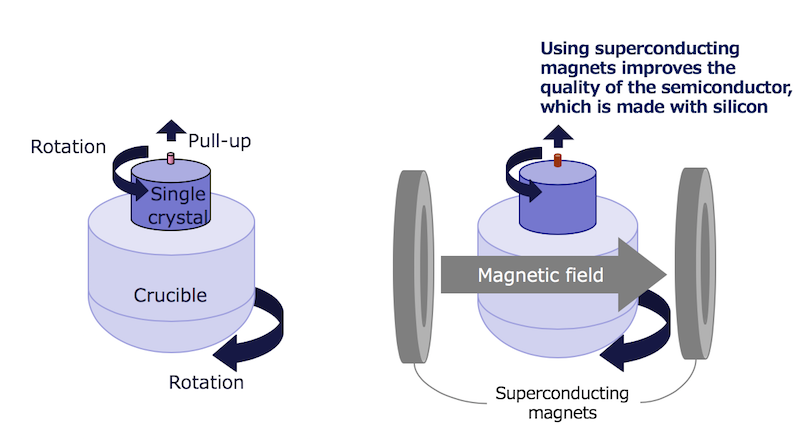 Takami: Exactly. At the time, I’d been sent to the development team to develop a new model for the silicon pull-up apparatus. Demand for semiconductors was growing, and everything was going swimmingly.

But this changed in 2008 with the Lehman shock, which caused demand for the silicon used in semiconductors to crash. At the time, development of the technology was pretty much done, but we had a really hard time finding buyers. 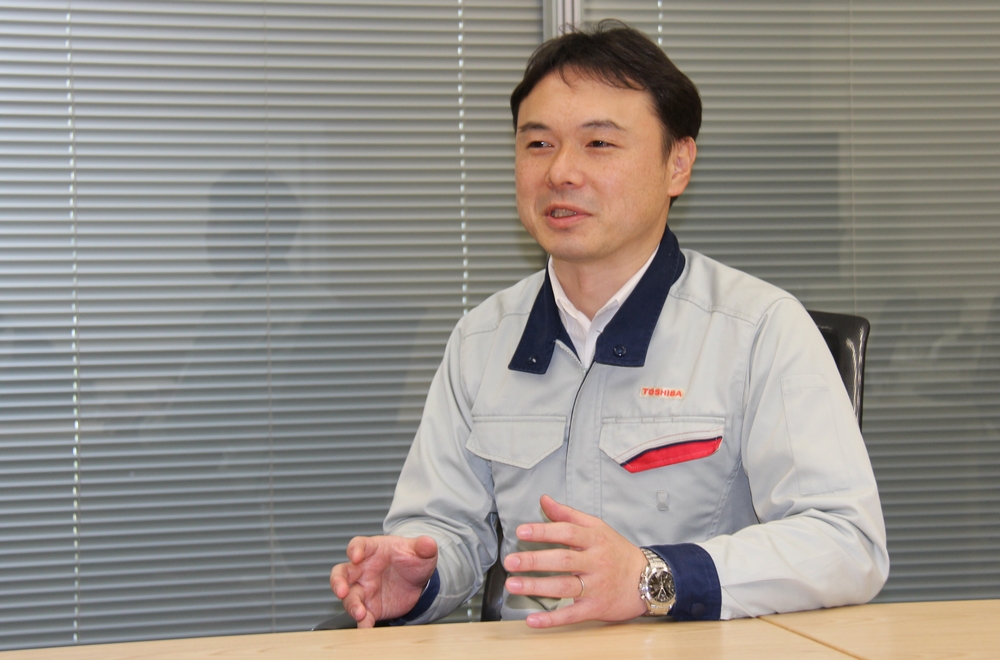 Sumiyoshi: It was the toughest time we’d ever gone through as a business as well. But the development that Mr.Takami and his team did at the time was really revolutionary.

The thing is, it’s not actually that difficult, in terms of superconductivity technologies, to create a superconducting magnet for a silicon pull-up apparatus. But there was an issue that was specific to its use as a general-purpose product—it had to be made cheaply.

Takami: Yes. It’s already difficult to maintain quality while lowering prices, but with general-purpose products, it’s even harder. If you make something that’s identical to another product, there’s the risk that the competitor will turn around and produce it cheaper, and fairly easily at that. 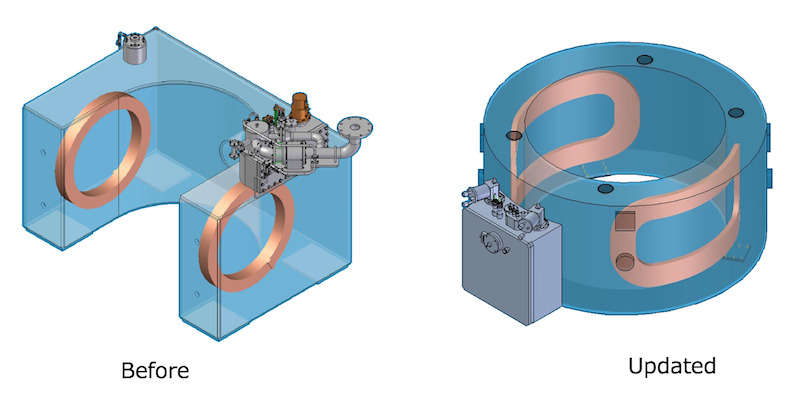 This allowed us to reduce cost, making it possible to lower the price as well. This was the first equipment I was involved in the development of, and I remember being really pumped up about contributing to the development of this new generation of semiconductors.

Sumiyoshi: Mr.Takami and his team also developed another, really interesting technology. To put a material into a superconductive state, you need to cool it to about -269℃ using liquid helium. But the price of liquid helium really started going up in the 1990s, and all over the world, companies were struggling to find a stable supply of it.

So Toshiba created a new kind of technology that wouldn’t require liquid helium, instead attaching the superconducting magnets to refrigerating machines to cool them. This ended up being a key technology Toshiba has with regards to superconductors. 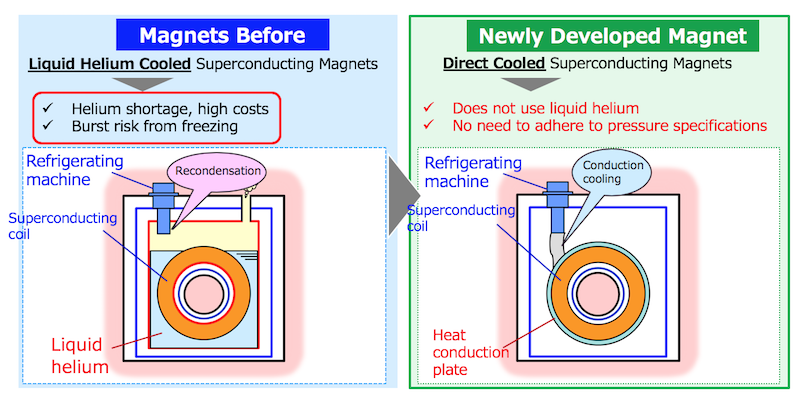 A new kind of technology that would not require liquid helium

Takami: When you’re designing something that’s already been done before, you can reference the formulas made in the past. But this was something entirely new, meaning we had to design it from scratch, and as an engineer it was a really great learning experience.

And in the end, it was these two technologies that made it possible for us to develop the superconducting magnets for the heavy ion therapy equipment gantries—turned the impossible into the possible.

――In article “Zero Electrical Resistance: Turning Dreams into Reality“, Takami said he was involved in the development of superconducting magnets for the gantry portion of the heavy ion therapy equipment—the part of the equipment that generates the radiation, and beams it onto the tumors of cancer patients—around 2010. You mentioned that by making the gantry smaller and capable of rotation, patients could receive treatment without having to keep their bodies tilted. 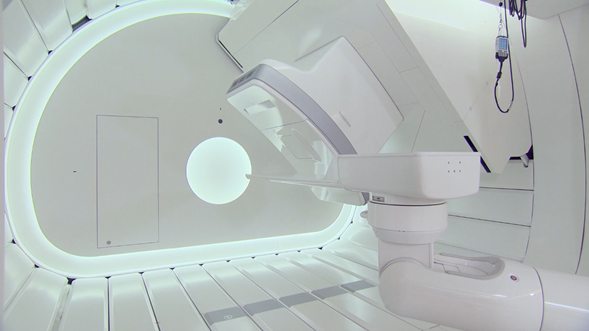 Takami: It turns out we used the technology from the silicon pull-up apparatus for the superconducting magnets used in this gantry. For the silicon pull-up apparatus, we’d changed the shape of the coils. For the gantry magnets, we improved upon the shape and made it more complex. In the end, we were able to make the gantry itself smaller, because the magnets didn’t require as much superconducting wires. 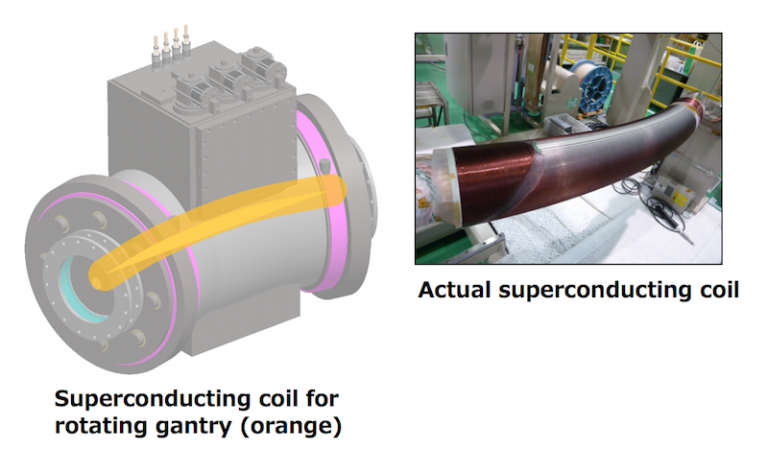 Our helium-free technology came in handy here as well. Previously, people had told us it was absolutely insane to think we could make a rotating gantry equipped with a superconducting magnet. Technically, this was true, assuming you’d need liquid helium to produce a superconductive state. If you turned the magnet over and—god forbid—some of the liquid helium accidentally spilled out, it could cause a serious accident.

But because of the technology we developed for the magnet for the silicon pull-up apparatus, which uses a refrigerating machine to create the superconductive state, we were able to turn this impossible dream into a reality.

Gantry rotation test—the superconducting magnets are in the blue arch portion (Courtesy of QST/NIRS)
This video was released on September 28, 2017.

When I first entered the company, I learned all kinds of things from my superiors, who were already involved in superconductor development—it was my path into the technology. And it’s in this kind of environment that superconductivity technologies in Toshiba have evolved.

That’s why I feel very strongly that Mr.Takami and his teams should be told of the technologies that have been developed, and that they should pass it on to the next generation, continuing this chain and linking to even younger engineers. Toshiba for sure has the platform to pass on these kinds of technologies.