In the vanguard of cancer treatment that respects quality of life, Part 1 -Lower burden from understanding the patient’s and medical staff’s perspective 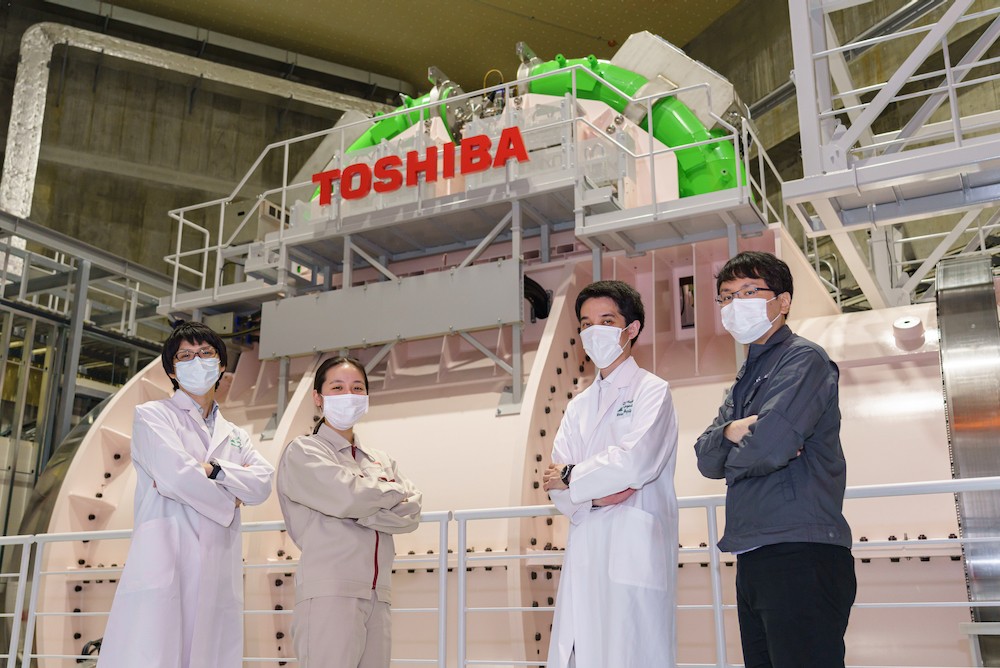 In the dead of night back in November 2018, a time when roads are quiet, cars few, a large truck left Sendai Port in northeast Japan. Its oversized load, slowly and steadily completing the overland leg of its journey to Yamagata University Hospital, was the deconstructed housing of a rotating gantry, a key component of a one of the few heavy-ion radiotherapy systems in Japan, manufactured by Toshiba Corporation’s Keihin Office in Yokohama. Two-and-a-half years after its delivery, in February 2021, it was ready to provide long-awaited treatment. The Tohoku region had a new and powerful option for cancer therapy.

This article takes a behind-the-scenes look at the team of professionals who overcame a variety of obstacles when installing this equipment and managed to start treatment. To reach that point, a team of dedicated professionals had to overcome a number of obstacles. 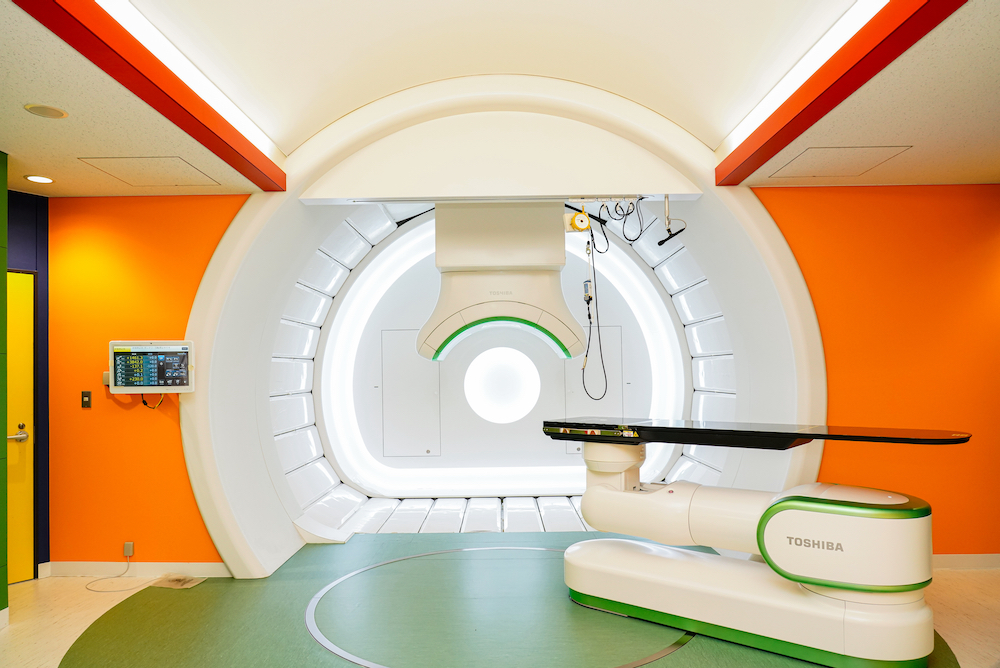 Most of us have been touched by cancer, directly or indirectly. In Japan, it’s the leading cause of death and affects one in every two people. It’s also an area where we all want to see advances in detection and treatment that raise recovery and survival rates, with an emphasis on improving quality of life, QOL.

Dr. Kenji Nemoto, who heads the East Japan Heavy Ion Center at Yamagata University’s Faculty of Medicine, has no doubts about the benefits of therapy the Center offers. “The biggest feature is being able to carry out treatment without damaging unaffected areas. It can also be used relatively often with elderly patients, who can have coexisting conditions that reduce options. It improves QOL, because outpatient treatment is possible, and one major benefit is not having to take leave or even quit working.”

There are three main cancer treatments: surgery, chemotherapy, and radiotherapy. Each has its own strengths and weaknesses, but generally speaking radiotherapy, which uses ionizing radiation to irradiate and kill cancer cells, imposes less physical burden and has fewer systemic effects. In recent years, the spotlight has centered on the higher energy levels and greater accuracy of heavy ions. 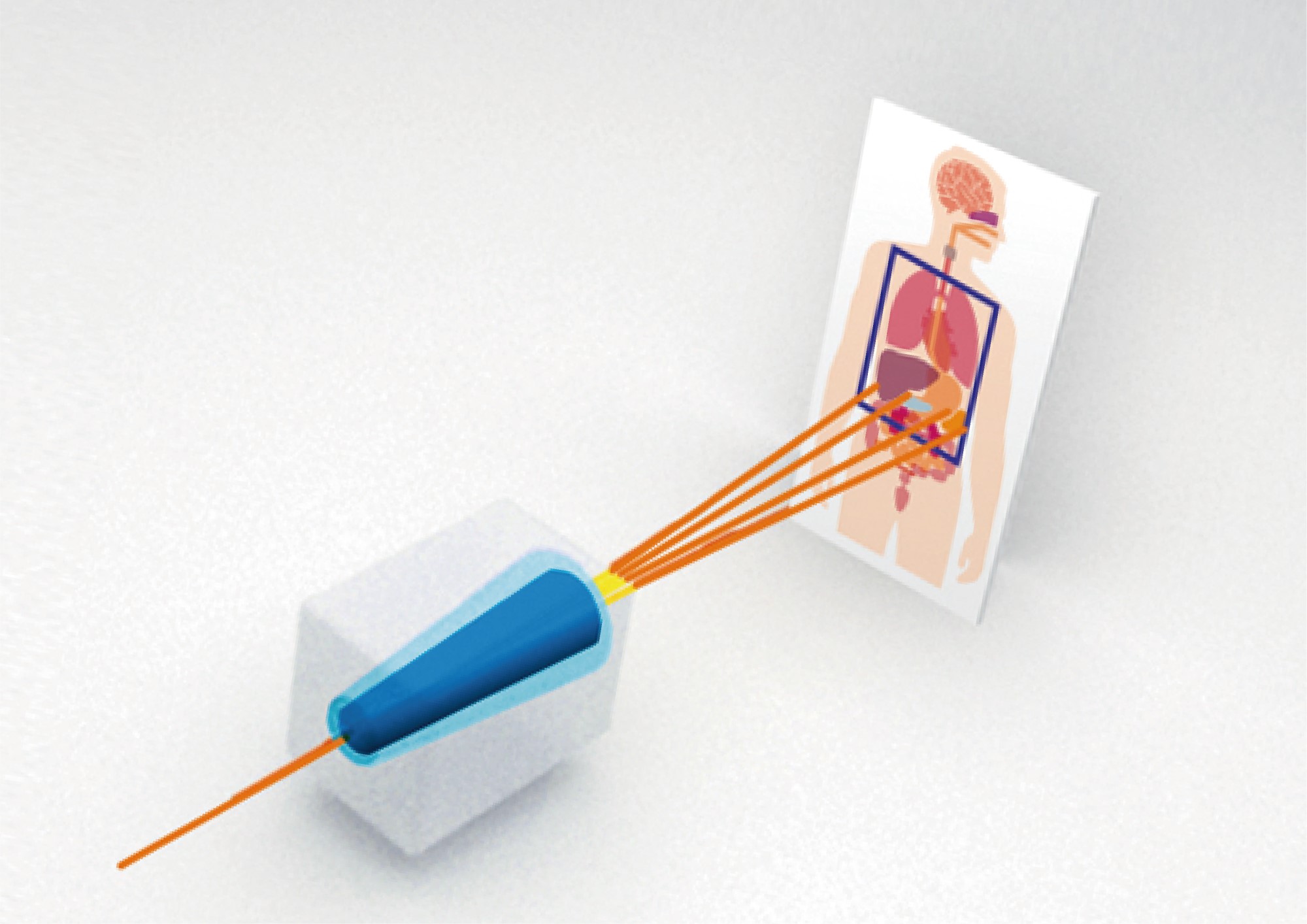 A characteristic of heavy ions is that when they reach a certain depth in the body, depending on their initial energy, the energy they impart to their surroundings increases dramatically through ionization*. X-rays and gamma ray beams are different. They scatter as they go deeper into the body; they are most effective close to the surface and weaken as they penetrate further. It is difficult to use them to irradiate cancerous cells deep in the body, but normal cells on or near the surface are damaged.

* When radiation passes through a material, the energy of the radiation repels the electrons (negative charge) of the atoms in the material and separates them into positively charged atoms and free electrons.

By adjusting the energy delivered and delivering peak ionization—the Bragg peak—to the site of the tumor being treated, heavy ions destroy cancerous tumors while minimizing damage to surrounding normal cells. This precision also reduces physical burdens and side effects, adding to the reason why heavy-ions systems are expected to be widely adopted for next generation cancer treatment.

The system at East Japan Heavy Ion Center has brought a paradigm shift and new hope for cancer treatment to Tohoku. But completing installation and starting treatment relied on the dedication and commitment of many professionals in a number of fields. We talked to some of them, from the East Japan Heavy Ion Center, B dot Medical, a start-up established in Japan’s National Institute of Radiological Sciences, and Toshiba Energy Systems & Solutions, the manufacturer of the equipment.

Broadly, a heavy-ion radiotherapy system comprises two elements: a synchrotron, a kind of particle accelerator; and a treatment area. The synchrotron accelerates carbon ions, a particle with a greater mass than helium, known as a heavy ion, to about 70% of the speed of light. This vastly increases their energy. From the accelerator, the carbon ions travel through a high-energy transport system to irradiation ports in the treatment area, and so to the patient as a heavy-ion beam. Japan’s first system, the Heavy Ion Medical Accelerator in Chiba (HIMAC), is installed on a site with the area of a soccer field, but the Yamagata system is the size of a gymnasium. 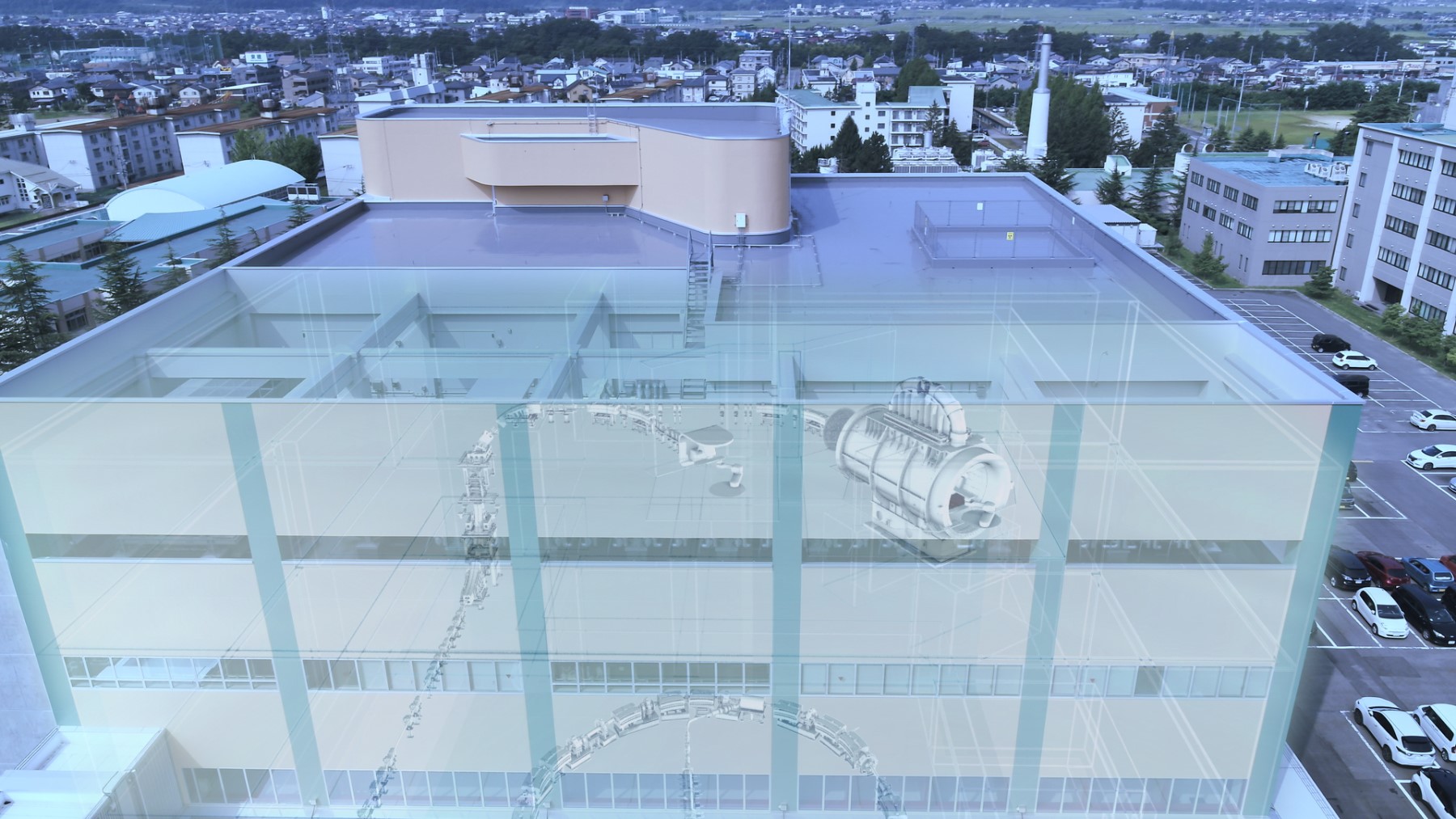 The treatment area has two rooms, one with a fixed horizontal beam port, the other housing the rotating gantry. Both accommodate patients on a treatment couch, a robotic arm with seven joints. Optimal positioning are determined from images of the irradiation field.

The rotating gantry is a major technological advance in its own right. The use of superconducting magnets allows it to move freely through 360 degrees, and irradiate heavy ion beam from any angle, which eliminates the need to put patients in uncomfortable positions, reducing stress while significantly expanding the scope of treatment. On top of all this rotating gantry for heavy-ion therapy is the world’s smallest, making it relatively easy to install.

Perseverance in fine tuning for precision and safety

A heavy-ion beam radiotherapy system in an amalgam of advanced technologies, and its installation and optimization are crucial—much more so than with standard radiotherapy systems. Before operation could begin at Yamagata, there were some major hurdles to get over, not least the adjustment of the accelerator and irradiation with the beam.

Dr. Hikaru Souda, a lecturer in Yamagata University’s Department of Heavy Particle Medical Science, is an expert in medical physics. He was responsible for verifying the safety of the installed equipment, and has many memories of the process.

“With any radiation source, there is the risk of leaks into the surrounding area. It has to be shielded, and meet the standards of the Nuclear Regulation Authority,” Souda explains. “To pass the inspection, you have to show that the equipment works as expected, can achieve maximum beam output under specified conditions, and that the radiation shielding prevents leaks while the beam travels to the treatment points. Beam adjustment was the first issue we had to face.” 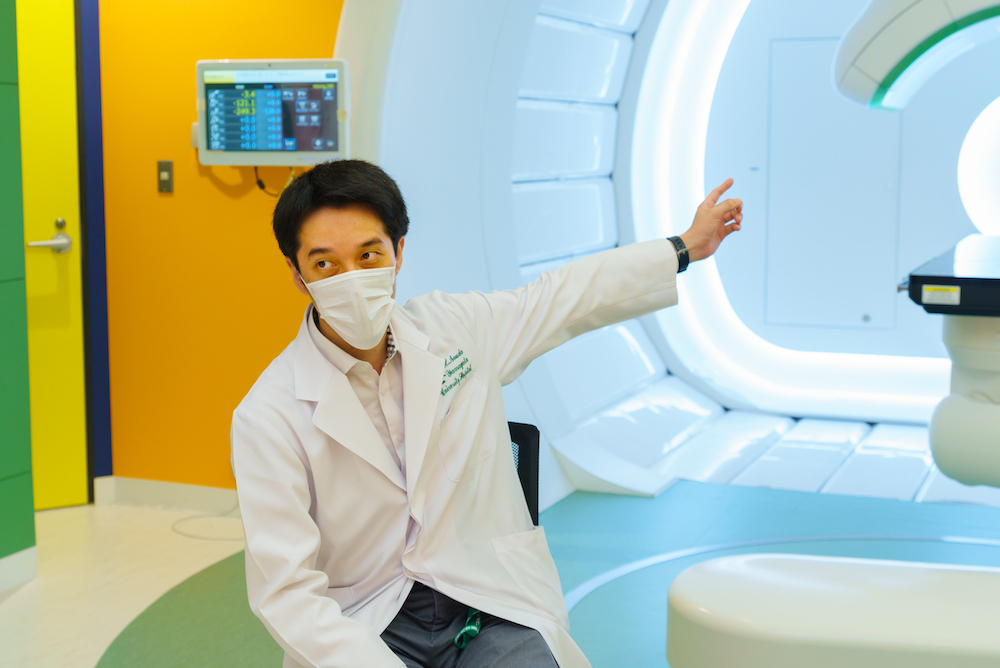 This high precision work was undertaken by B dot Medical. It’s a start-up that grew out of Japan’s National Institute of Radiological Sciences, which researches radiological science and its application to the diagnosis and treatment of disease, and known for its advanced technology and expertise. Dr. Yuichi Saraya, a section head in B dot Medical’s Engineering Group, who works at the forefront of accelerator design, led the team that did the adjustment. He recalls some tough moments.

“Our first difficulty was projecting an accelerated beam from the accelerator. That really didn’t go well, and took almost a month longer than expected. I knew that we wouldn’t get inspection by the Nuclear Regulation Authority if we couldn’t generate a beam, and I remember being quite anxious about that. We also struggled with the setup of the injector, which produces the carbon ions for the beam and sends them to the accelerator. In every single phase, injection, acceleration, and irradiation, we had nothing but difficulties.” 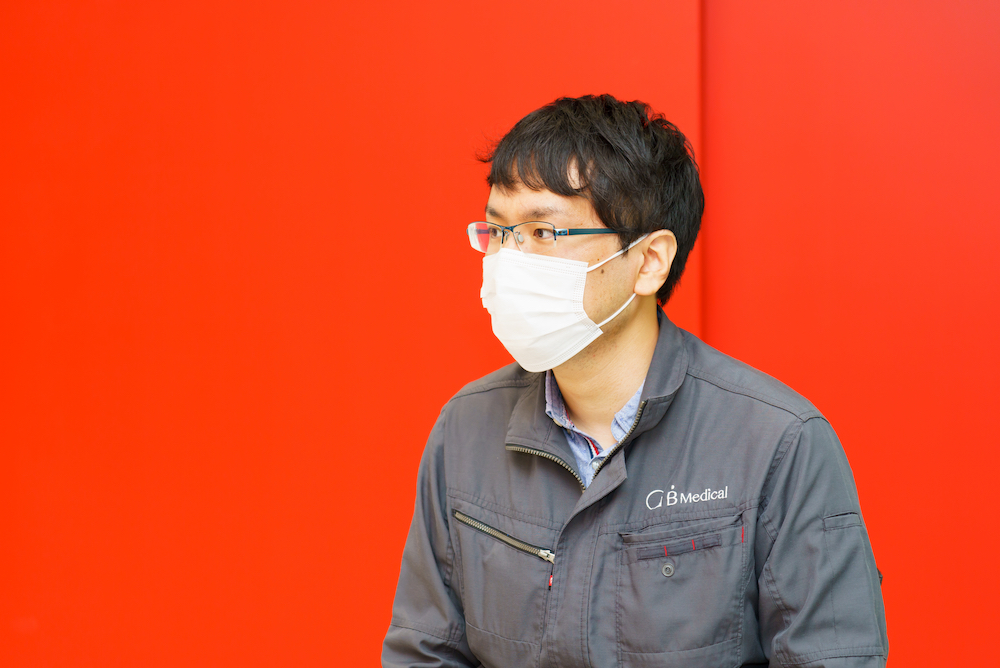 While all this was going on, Souda was still optimistic about progress, at least at the beginning. “The system at the Center was the second Toshiba installed,” he explains. “The first was a system called i-ROCK, installed at the Kanagawa Cancer Center in 2015. They looked the same, and I naively assumed that they were almost the same. It turned out that there had been performance optimizations and improvements, and from the user’s perspective they were almost completely different internally and to control. A lot of things confounded me. Finally, we proceeded by checking improved parts one by one, though that turned out to be very difficult, even now, we verify the performance of the accelerator every day, to a millimeter.”

As Souda speaks, Dr. Takayuki Kanai, Assistant Professor of the Tohoku Future Cancer Medical Course nods in full agreement. At the East Japan Heavy Ion Center he is responsible for implementation of the information system to manage irradiation status and patient treatment status, and software for the treatment planning. But he also has expert knowledge of i-Rock and also of the system installed at the National Institutes for Quantum Science and Technology’s QST Hospital in Chiba, east of Tokyo.

“The systems in Chiba and Kanagawa are the same, and because we were installing the equipment at the East Japan Heavy Ion Center after those facilities, we thought we could handle any problems that might come up. But in the end, we had to make significant changes to the information system settings. It was a reminder that small improvements can have big impacts. It just didn’t go as planned.” 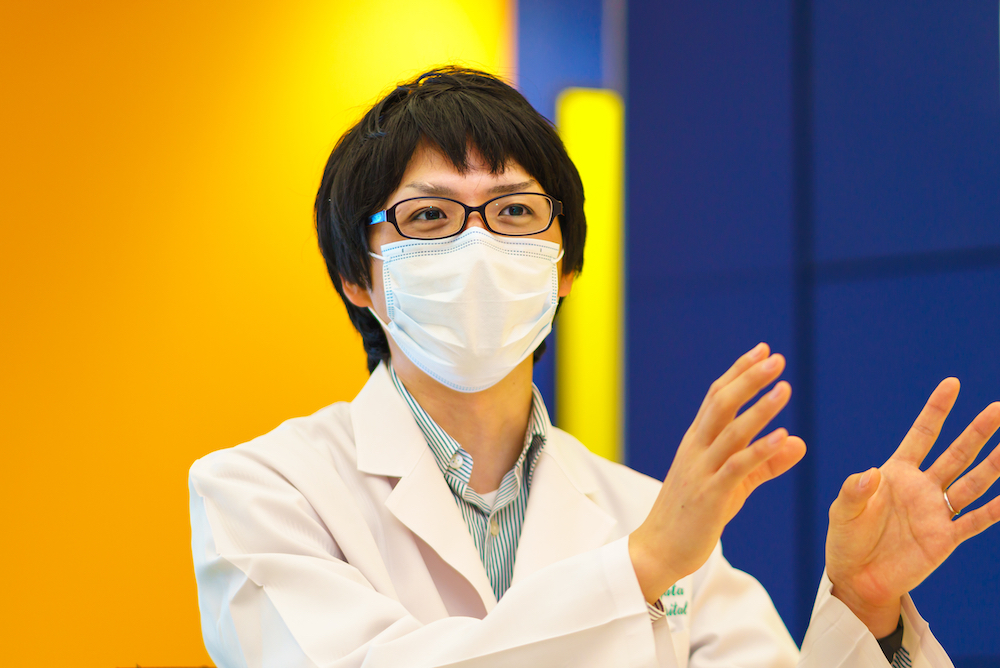 Expectations from doctors and patients soared, with treatment reservations more than tripling expectations!

Unfortunately, there isn’t a magic wand that can deliver the ideal with a single wave. Everyone involved realized they were installing completely new equipment; they had to forget past successes and advance by making adjustments one at a time, one after another. Thankfully, one adjustment that went particularly smoothly was to the line that carries the heavy ion beam from the accelerator to the treatment area. The team were very careful when measuring the magnetic fields of the superconducting magnets.

“A really slight deviation in the magnetic field, even one close to zero can shift the beam position around 1 mm,” explains Saraya. “If a number of them had overlapped, the beam would not have made it to the treatment area, and something like that could have delayed the start of treatment by another two months or more. We had a hard time with i-ROCK because there was room for improvement in the magnetic field measurement, but this time we were able to make use of that experience.” 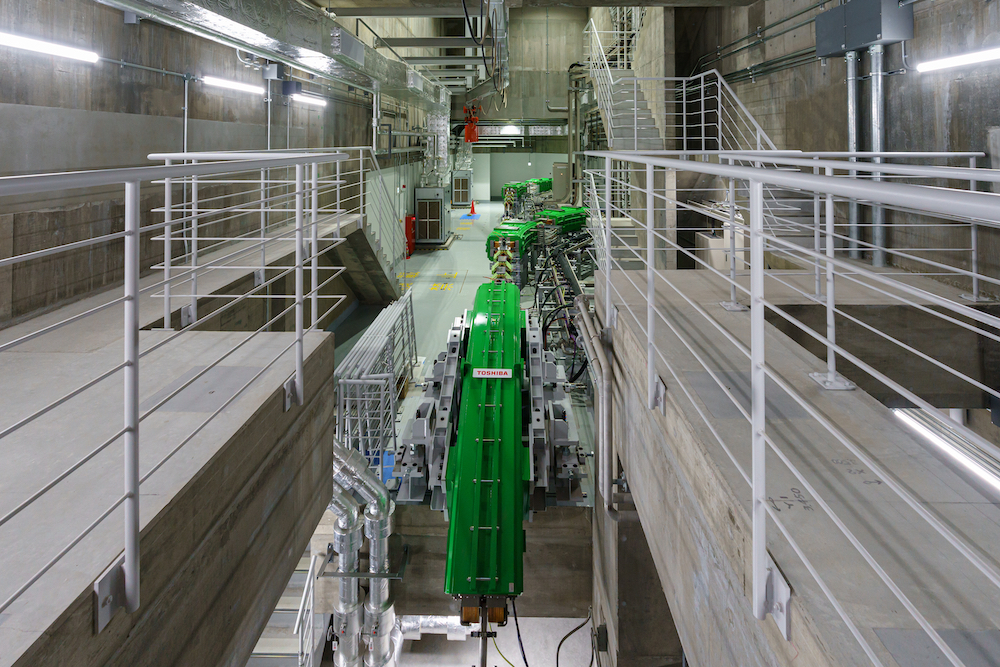 Part of the accelerator at East Japan Heavy Ion Center

As progress inched forward, the date for starting treatment was finalized: February 25, 2021. A short six months away. Souda recalls how we felt at the time. “By then, we’d already postponed the scheduled start twice, but there were high expectations, in Yamagata Prefecture and beyond, and we really felt we couldn’t delay any further, for the sake of our patients. But having a date helped. Once we had a final goal in clear view, we would work back from there, to see what we needed to do to get there in time.”

“Those last six months were the most important for equipment adjustment,” says Kanai. It was also a period of growing interest in the new unit. “Every two or three days, doctors treating cancers would contact us to ask, ‘Is it really on time?’ Naturally enough, they wanted their patients to receive high quality care as soon as possible.” That was a goal that motivated everyone involved in the East Japan Heavy Ion Center, including Kanai: “I must do all I can to make it happen on time,” he told himself.

The team’s efforts paid off, and on the due date. On February 25, 2021, the first patient was treated successfully. And that was just the beginning, as Kanai explains; “Demand was really high. We already had three times the number of reservations we expected.” It seems that the East Japan Heavy Ion Center was something cancer patients in the Tohoku region have been waiting for.

Part 2 will delve into the challenge of developing software that makes heavy ion cancer therapy more effective, and technology that not only improves patient care but reduces costs. 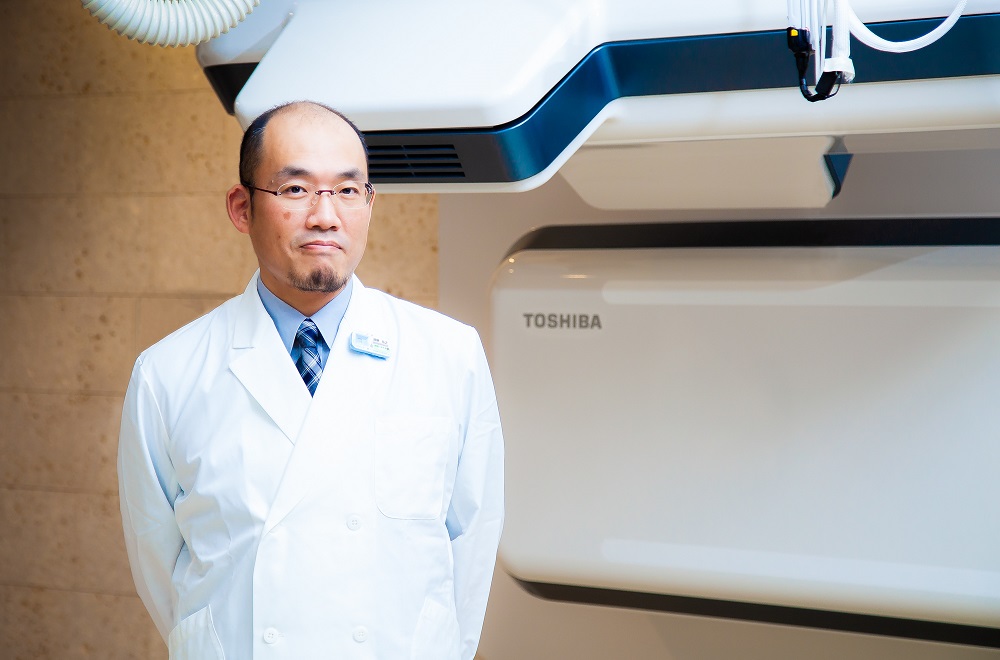 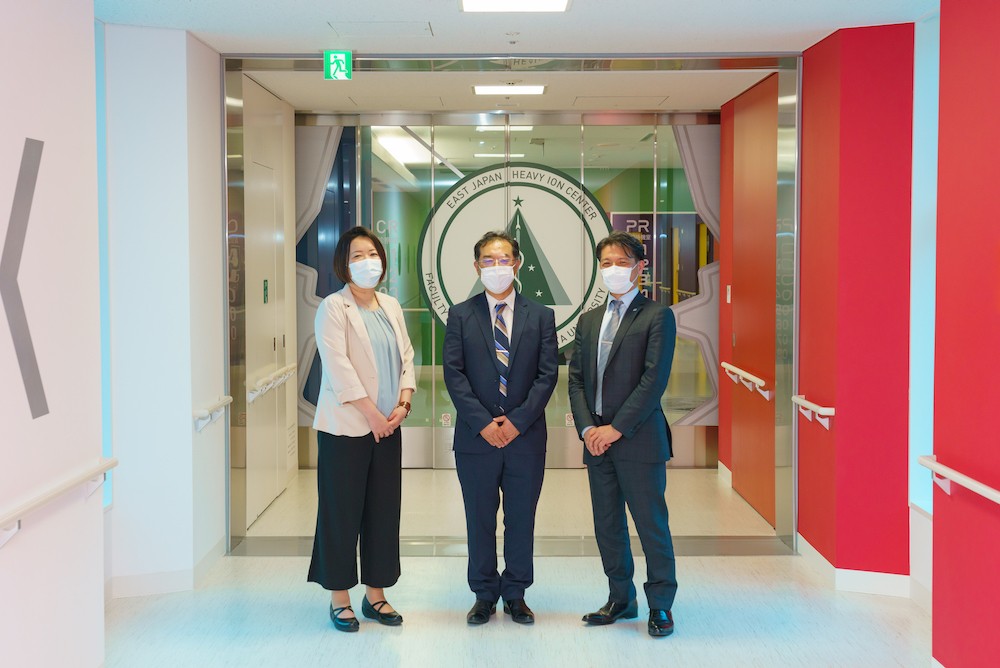