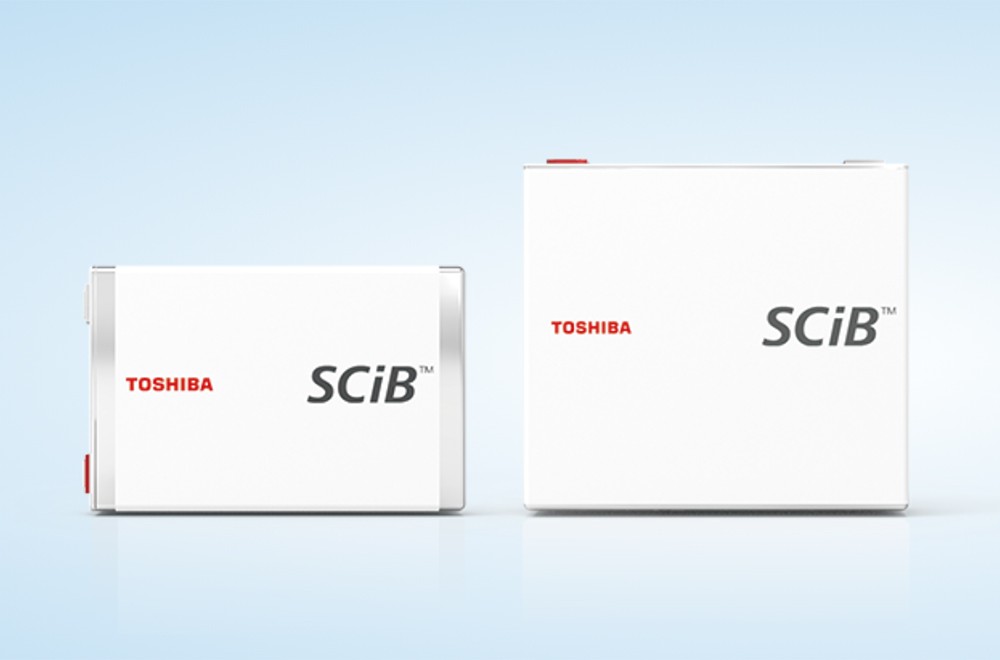 The Nobel Prizes in Chemistry has always been more than just a prize; it reflects one of the highest achievement one can attain in the intellectual field. In 2019, that honor went to a trio of US and Japanese researchers: John Goodenough (University of Texas), Stanley Whittingham (State University of New York) and Akira Yoshino (Asahi Kasei). History will remember them for their groundbreaking contributions to the development of lithium-ion batteries.

Working for John Goodenough at the time was Koichi Mizushima, who was a post-doc physics researcher at the University of Tokyo and is now an Executive Fellow at Toshiba. He was involved in Goodenough’s research on cathode materials for high-capacity lithium-ion batteries and discovered the potential for lithium cobalt oxide. This discovery contributed to creating the basic structure of the lithium-ion battery that gave us today’s world of go-everywhere portable product. To commend Mizushima’s distinguished work, Toshiba presented him with a special award. 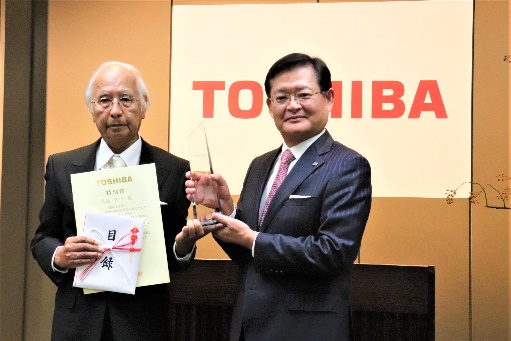 The 2019 Nobel Prize in Chemistry shows that there are mounting expectations on the development of lithium-ion batteries, in part to achieve the United Nations Sustainable Development Goals (SDGs). Take a look at the automotive industry, for example. We’re seeing a rush to develop electric automobiles to reduce CO2 and fight global warming worldwide. But electric automobiles need batteries with long life and high input/output­—that’s where Toshiba comes in.

Lithium-ion batteries are small and lightweight, and their high energy density offers high voltage and large capacity. Their outstanding ability to withstand over 500 charge and discharge cycles contributed to the development and widespread use of devices like the smartphone. Expectations then naturally turned to developing new, revolutionary technologies that can create lithium-ion batteries with even greater capacity and energy density so that they can be used in electric automobiles. But it’s not that easy. These demands require researchers and engineers to overcome significant obstacles such as ensuring safety and extended durability.

Different performances are required for different uses of lithium-ion batteries

For example, increasing capacity and energy density means storing a large amount of energy in the battery, which raises the risk of a serious incident if something goes wrong. So strict quality management is necessary to prevent foreign substance contamination during the manufacturing process. Furthermore, batteries used in industrial fields need to be able to withstand extreme environments and those used in equipment that are hard to replace need to be able to perform safely and steadily over an extended period.

Lithium-ion batteries with high capacity and high energy density are needed for electric automobiles as well as for stationary and industrial batteries. To respond to those needs, Toshiba offers SCiB™, which is a lithium-ion battery that uses lithium titanium oxide (LTO) in its anode. By using LTO in the anode, SCiB™ achieves safety, long life, low-temperature performance, wide effective SOC*1 range, rapid charging and high input/output. This extensive range of impressive excellent characteristics resolve the diverse technical challenges described above.

●Advantages of an LTO anode (1): In principle, metallic lithium deposits DO NOT form on the anode, which lowers the risk of internal short circuits

Challenges of lithium-ion batteries are degraded performance and combustion caused by internal short circuits. These, in turn, are caused by branch-shaped metallic lithium, called dendrites, that are deposited on the anode. When dendrites grow and reach the cathode by piercing through the separator, the battery short circuits and raises the risk of fire.

*2 Insertion: When lithium ions get absorbed into a solid.

●Advantages of an LTO anode (2): An original self-protection mechanism against short circuits

Even if a short circuit were to occur, LTO has a self-protection mechanism, which ensures a high degree of safety. While LTO is an insulator, by absorbing lithium ions, it functions as an electrode material (conductive phase). If a foreign object like a metal gets mixed in between the cathode and anode by mistake, the lithium ions are instantly released from the LTO close to the short circuit point, turning the LTO anode into an insulator (high-resistive phase). This prevents the flow of excessive short circuit currents and controls the battery’s thermal runaway. That’s how the self-protection mechanism works. 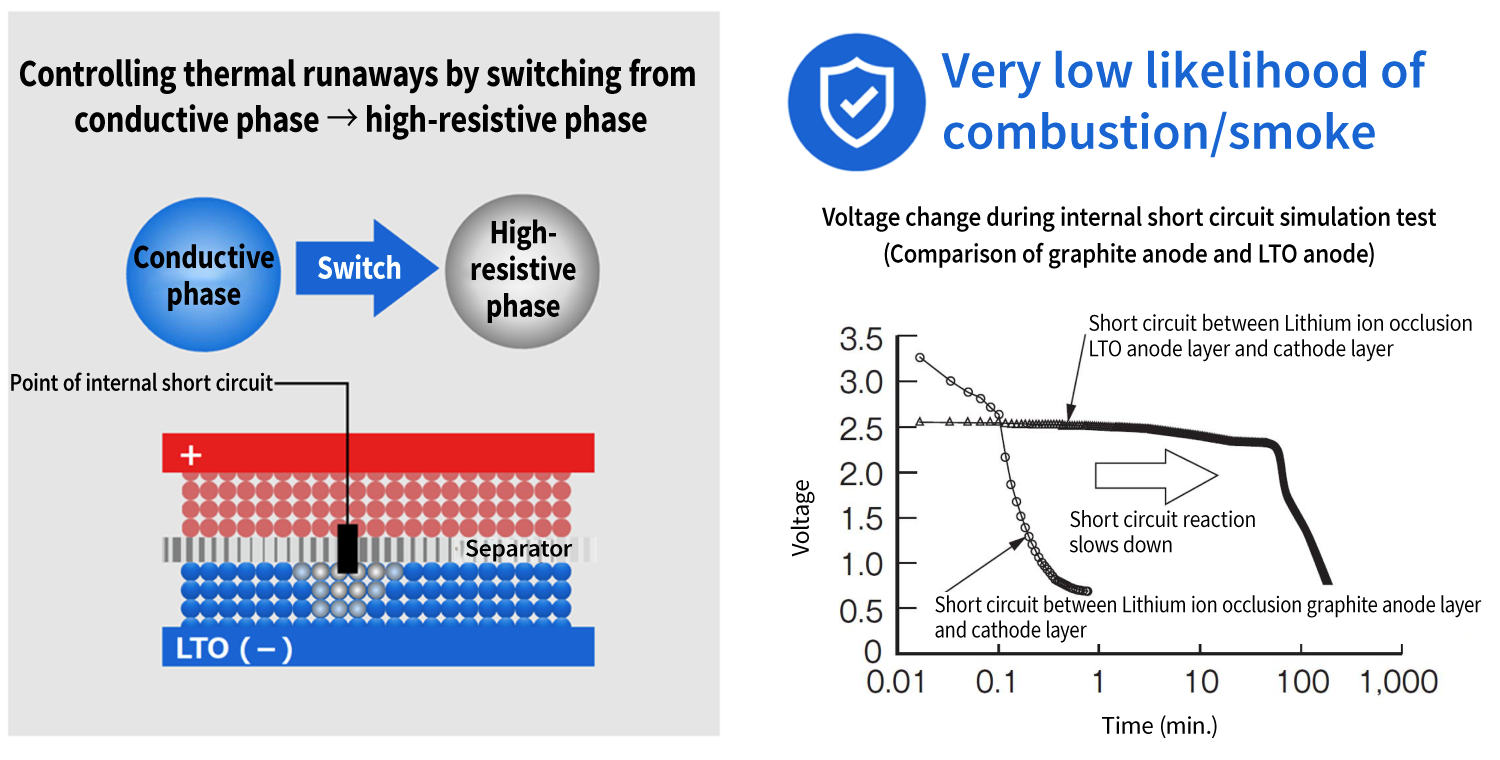 ●Advantages of an LTO anode (3): Rapid charging and low-temperature performance

Metallic lithium (dendrite) is unlikely to form on LTO anodes when charging rapidly. SCiB™ makes the most of this advantage to ensure safe and rapid charging. In just three minutes, it can charge up to 80%. What’s more, dendrites didn’t form on the LTO anode in charging experiments conducted in temperatures as cold as -20°C. This allows the battery to be charged and discharged repeatedly without degrading its capacity.

Volume changes of around 5-15% happen in conventional lithium-ion batteries because they absorb and release lithium ions. This physical volume change damages the battery’s material and lowers its capacity, which also shortens its life. In contrast, LTO anodes used in SCiB™ are structured in what’s called a spinel shape, which is extremely stable. There is virtually no change in volume caused by the absorption and release of lithium ions, so the battery has a long life. This has been tested under high temperatures of 35°C where, after over 20,000 charges and discharges, the battery maintained over 90% of its capacity.

As we’ve already seen, SCiB™ has various unique characteristics. A comparison of its performance against conventional lithium-ion batteries is shown in the table below. Compared to conventional lithium-ion batteries, SCiB™ has a lower cell voltage, but it has a longer charge/discharge cycle life and can operate and charge in a wider range of temperatures. This lowers the total cost of ownership.

Lithium-ion batteries are increasingly being used in electric automobiles and large-scale equipment such as industrial equipment as measures against global warming. Toshiba believes SCiB™ is one such solution with its ability to charge rapidly, charge in low temperatures and operate durably for a long time. In Part 2 of this series, we’ll feature our lineup of SCiB™ products, how they can be applied in industrial fields, and our future aspirations for the application of this pioneering technology. 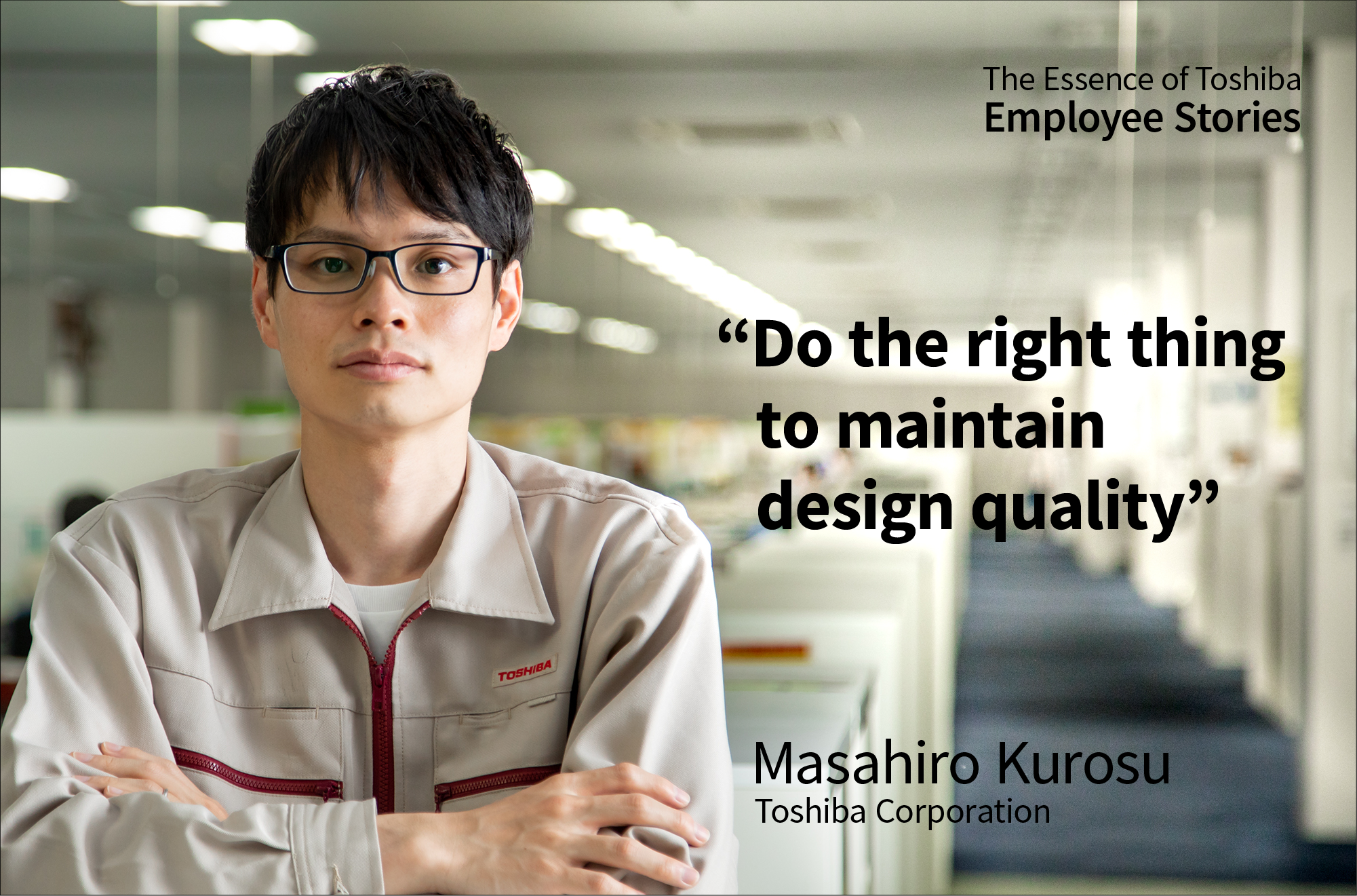